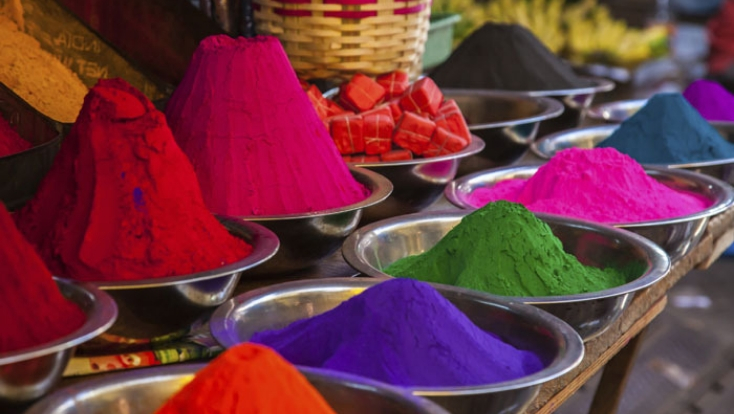 It is that time of the year again – the festival of colors is just around the corner!

One of the most vibrant festivals of the country, Holi is widely celebrated in different parts of the country with much enthusiasm and gusto. It is the festival that celebrates the onset of spring, and the victory of good over evil. Holi celebration is an attraction in India that no one can escape from.

Since India is a diverse country, there are different types of Holi celebrated throughout the length and breadth of the sub-continent. Here are some of the most beautiful and exotic types of Holi that are celebrated in India:

This Holi is celebrated in the Kumaon region of Uttarakhand. The locals wear traditional clothes, revel to Khari music and express their mirth in the form of dancing. The ‘tolis’ or groups of people greet passers-by with colors and sweets. In Uttarakhand, Holi is usually celebrated in many forms, such as Baithika Holi, Khadi Holi, and Mahila Holi.

This beautiful festival of colors is actually celebrated a day after Holi. It is usually observed by a section of the Sikh community, known as the Nihang Sikhs, and celebrates the bravery of the Khalsa, or the sect of Sikh warriors. Instead of colors, the celebration involves a display of martial arts, which is then followed by music and dance.

Lathmar Holi finds its origins in Hindu mythology. It is believed that when Lord Krishna arrived at Radha’s village to play Holi with her, the women of the village hit him with lathis and chased him away. Keeping with this tradition, the women of the village arm themselves with lathis and hit the men playfully. The men have to protect themselves with dhals or shields. It is important to remember that all this is done playfully without an ounce of aggression. If you visit India during the month of Holi, b..e sure to witness this unique celebration.

In Bihar, Holi is also known as Phaghuwa. One of the important aspects of this festival in India is the Holika Dahan, where a big bonfire is lit and worshipped by the local women throughout the night. The practice largely symbolizes the victory of good over evil. This practice is widely prevalent in other parts of the country as well. The next day is spent throwing drying and wet colors on each other and participating in the revelry by means of dance and music.

The people of Manipur make the most of the Holi celebrations. In Manipur, Holi is a week-long affair and is known as Yaosang. This is a celebration like no other, fueled by the unparalleled enthusiasm of the people. A hut made of twigs and hay is burnt, following which the local youth perform traditional folk dances. Lord Krishna is worshipped as colors fly in the air, and processions are brought out in various parts of the city.

This is Kerala’s very own way of Holi celebration. The festival is not very popular across the whole state and is special to the Konkani and Kudumbi communities. The vigour, enthusiasm, and gusto of the festivities put up by these two communities should not be missed at all. Another unique aspect of the Ukuli celebrations is that instead of using the traditional gulal or powdered color for application to each other’s faces, the two communities use turmeric. Turmeric is the main color used in the celebration of Manjal Kuli.

This is a popular celebration in the state of Maharashtra. Shimga is actually the day before Holi, and the day involves practices such as Holika Dahan or lighting up a pyre made of firewood, and worship, as prevalent in the other parts of the country especially in the north. The following day is Rang Panchami, the day when the locals smear dry and wet colors on each other. The festivities can last as long as a week in this part of the country and is one of the major attractions in India.

Holi is celebrated as Dol Jatra in Kolkata and the surrounding areas of West Bengal. Basant is the Bengali word for Spring, signifying that this festival is in honor of the arrival of spring. On the day of the celebration, women dress in yellow, or ‘Basanti’ color, which is actually the color of abundance. If you want to catch the true essence of this celebration, take a quick trip to Bolpur or Shantiniketan from Kolkata. In these two must visit places in India, Bengali culture is epitomized on these two days- with art, dance, music, poetry and the like coming to the forefront. And since no Bengali celebration is complete without its iconic sweets, many sweetmeats are made and sold to visitors who arrive to witness the festival in its full glory.

As the celebrations in its neighbouring state West Bengal, Dola in Odisha is a colourful affair. The festival centers around Lord Jagannath, who is also known as Dolagovinda. The pain aspects of the celebrations include processions of the God, which are taken out at different times in the day, as well as a plethora of food, constant music and dance, and of course, the smearing of colours on the faces of loved ones.

Although Holi is a primarily North Indian celebration, Hampi in Karnataka provides a fantastic aberration from the norm. Hampi is a town in Karnataka which celebrates Holi with unmatched gusto. Colours fly rampant in the city and are accompanied by beats of the drum, dancing, and singing. These are all part if the customary celebrations in the city. Make use of some of the best travel hacks to visit the city on your India tour.

Colours, dance, music, cuisines of India, and a spirit of celebration are common to the festivities surrounding Holi, one of the most prominent festivals in India, no matter which part of the country it is celebrated in. It signifies the advent of spring and is a reminder of the victory of good over evil. It is as pious as it is enthralling.